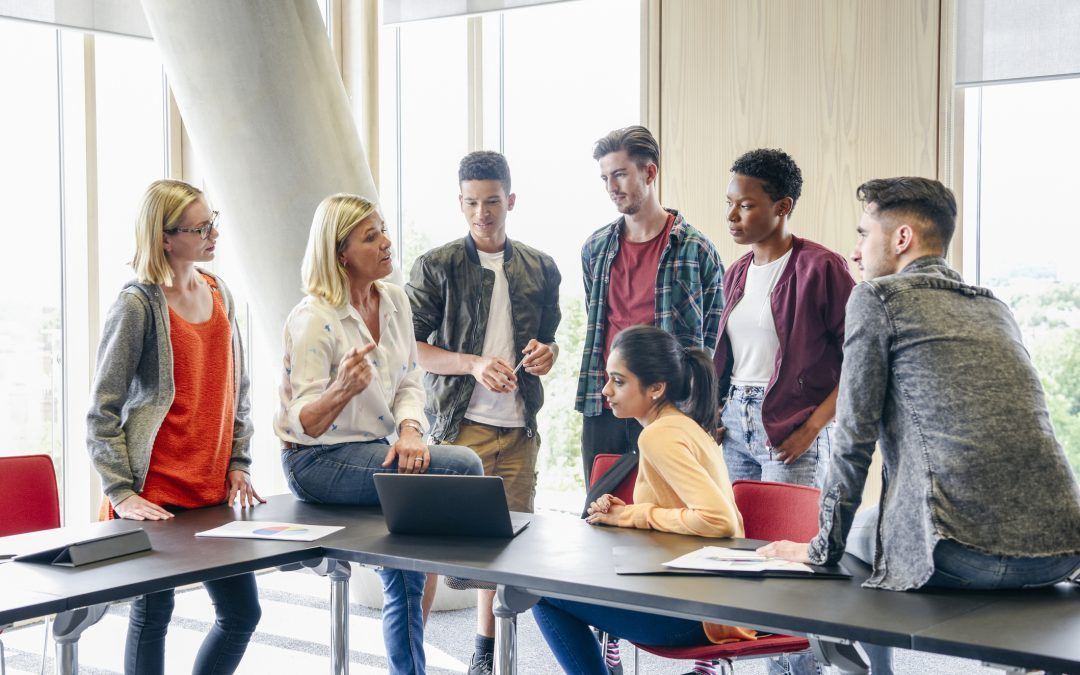 It is 3 years since I made my geriatric foray into the wonderful world of EdTech.

Ok, maybe I am exaggerating the geriatric bit, but not much. As a woman in her 60s I often find myself as the oldest person in the room and often the room shows surprise at my excitement for new technology. There is often an assumption that we teachers are predisposed to object to or reject new technologies. That we are out of step with the future needs of our students.

What is a surprise to many is that even way back in the days of blackboards and chalk, teachers were already aware that they were preparing students for jobs that didn’t yet exist. And they still are. Those who bang on about how schools are not preparing students for the future of work are conveniently forgetting two important points. First is that they themselves have somehow been educated in a way that has allowed them to be part of this discussion. Secondly, they are assuming that they know what the future of work is actually going to look like.

Perhaps I am too sensitive, but we English teachers certainly get a lot of bad press. Some of it is deserved, there really is no reason to be teaching the same texts year after year to different groups of students, but mostly it is a failure on the part of onlookers to understand what English teachers actually do. Like any first language, English is first and foremost a language, and languages are a method of communication. We teach students to communicate in writing and speaking, and to comprehend in listening, reading and viewing.

Moreover, by using texts from different times and places we allow students to discover that their reality may not be universal, while at the same time understanding that what they are experiencing may not be unique. We get to lead them to a place where it is safe to question everything, to test and interrogate belief systems before adopting those that make most sense to them. On a really good day we get to introduce them to the idea that everything around them is part of a social construct developed over time, usually to benefit the dominant social group. Once they have learnt how to carry this knowledge lightly they can enter that space where thinking ‘outside the box’ is as natural as breathing.

The future of work

Fortunately, there are a growing number of education commentators who are talking about this and suggesting that we don’t throw the baby out with the bathwater.

I recently discovered a Medium article by Greg Satell titled Don’t Don’t Teach Your Kid to Code. Teach Them to Communicate. Satell argues that if we focus on teaching current technology skills we will be doing students a grave disservice as these skills will be redundant very soon. He refers to a study undertaken by Oxford University which posits that 47 percent of today’s jobs will be eliminated over the next 20 years.

Satell goes on to argue that  it is the very skills that the humanities are criticised for that will become the most valued. These are the skills that are hard to measure. Critical and creative thinking, empathy, communication, alternative readings and constant questioning of the status quo. It is this ability to question and thus to keep learning that will be important. And they will be important because these are ‘human’ skills and skills that machines will have trouble emulating.

According to Setell  ‘the jobs of the future will not depend as much on knowing facts or crunching numbers as on humans collaborating with other humans to design work for machines.’ To work successfully in teams requires communication skills, and advanced ones at that. Multidisciplinary teams require experts to communicate their knowledge and information in a way that is understandable to people with different specialties. I remember asking a professor once about writing in a tertiary course. He told me to write it for a really smart person from a field different to my own. That advice has served me well and ensures that jargon and insider understanding are jettisoned for the sake of useful communication.

While many English teachers, and I have been one, get a bit fed up with the emphasis on STEM subjects, to the detriment of the humanities, we do understand their value and we do want to embrace the new technologies as a way of engaging with students. Technology needs to provide tools that improve the learning experience of students and teachers, rather than being a distinct unrelated field of study. We need to continue to provide opportunities where students work in groups, where they learn social skills like compromise, conflict resolution and how to play nicely with others.

Another really cool article I discovered was written by Emily Tate and published on EdSurge on June 12th last year. Titled Students in Tech Say Soft Skills and the Arts Set Them Up for Success, the attached media was a photo of a seven person panel of young, smart, tertiary tech students. Each of the panellists recounted their experiences applying for jobs and internships and the skills that employers were looking for. The ability to think critically, to solve complex problems, to communicate, collaborate and adapt was more important than their tech ability. Partly because tech changes so rapidly that what tech students know now is likely to be redundant by the time they complete their degree. Also, as was mentioned by Satell in his article, ‘high-value work today is being done in teams.’

Students recounted skills learnt in activities as diverse as a gallery manager, a music composition teacher, an actor in school and college productions and a mentoring program to younger students. Keep in mind that these are high level tech students. Their specialties are in such areas as cloud computing and cyber security. For me, the most profound advantage of an arts and humanities education was articulated by Nathan Wallace, a recent graduate of Georgetown University’s master’s program in technology management. Wallace claims that his grounding in the humanities reminds him to ask the ethics questions in any discussion about technology.

I have been working for almost a year in a sensational co-working space called One Roof in Melbourne. Designed to cater specifically to female led businesses it is home to a seriously diverse range of enterprises. One of these is ROWBOAT, leaders in the field of human-centred design. While the details of what they do are far above my head, I wanted to bring their thoughts into this conversation. It was actually the founder, preferred term Captain, Bec Lloyd who suggested the title of this article. Bec pointed me to the work done by the world economic forum 2020. According to the forums research the top 3 job skills that will be required in 2020 are complex problem solving, critical thinking and creativity. In 2015 creativity scraped in at number 10.

More importantly, and related to creativity, emotional intelligence and cognitive flexibility made the top10 for the first time. According to Bec at ROWBOAT all the skills needed in the future will be soft and we need to stop putting them in quotation marks and undervaluing them. So important is this shift in thinking to them that Ben Mackenzie one of the design crew, lists ’nice guy’ as one of his major skills on his Linkedin profile.

I certainly would not undervalue STEM subjects and the moves to get more women into STEM is important. What is equally important though is to get more males into the humanities. We need to get rid of the idea that smart people of either gender shouldn’t waste time on ‘soft skills.’

The discussion over preparing our students for the future is going to be long and it needs teachers to get involved in the process. We would love to hear your thoughts. You can find us over at our page on Facebook.